If you haven’t used Wikipedia (an online encyclopedia) lately, you might not know that anyone can write data into the information found there. Unfortunately that encourages many people to promote their own favorite phobias and hatreds that they have developed without evidence. In the case of MMS, it has always been without evidence because there is nothing that backs up the lies. There is no evidence anywhere showing that MMS does damage.

Another bad part about Wikipedia is that anyone can also erase anything that someone else writes. In this way Wikipedia encourages hundreds of demented and stupid psychopaths to push their ideas and beliefs on the rest of us. The psychopaths work in groups of at least 4 individuals.

· They watch and guard their writings and the minute anyone comes by and tries to write the facts, a psychopath immediately erases them and restores his or her own lies.

This is done on Wikipedia so that the lies remain in place and any posting of facts is erased within 10 minutes. We can’t compete with them as they seem to be willing to stay on the job 24 hours a day.

Thus, for almost two years, Wikipedia has erased all facts concerning MMS and added lies each time someone tried to tell the truth. Worse than that,

· Everywhere in Wikipedia where there is a mention of chlorine dioxide or sodium chlorite, or even sodium chlorate, they have included an additional lie about MMS.

Do you realize the implication of this? It means that probably thousands of people have continued to suffer and even die when MMS could have helped them, because these few demented psychopaths have continued to lie and to force their superstition on the rest of humanity. They do it without knowing the chemistry of MMS or even trying to learn it, and without being willing to look at what MMS is doing. They also do this same thing to many other non-medical disease treatments. They have decided that they know best for humanity and that you and everyone else don’t deserve to know what is out there. Or they can afford to do it because the pharmaceutical companies pay their salary and of course that is the most likely scenario.

Should I apologize for calling them psychopaths? There doesn't seem to be a nice word for them. If they were just doing this out of ignorance, I would find a nicer name, but paid or not, they do it out of malice and they are hurting people.

So let me explain what they have done concerning MMS. There isn’t room to repeat what they have written word for word, but I’ll give you an idea. If you want to read it, and I hope you will, you can go to Wikipedia and search the site for "Miracle Mineral Supplement".With that title for their article, they start off on the wrong foot -- that is not the correct name of MMS. It should say, "Master Mineral Solution".

You can put this into Google or any search engine. Most of the food you eat is treated with sodium chlorite before it arrives at your supermarket.

· No one ingests sodium chlorite from taking MMS

I call this a "mistake" but when a person knows his writing is wrong it is really a lie.

The Wikipedia References are Smoke and Mirrors

The Wikipedia writers list 21 references to prove their points. But their references either prove my point or they prove nothing.

· References 1 and 3 are not available and thus prove nothing.

· Reference 2 is a scientific journal in French, but it only refers to chlorate, which is not a part of MMS, so this reference proves nothing.

· Reference 4 is a clinical report of testing animal tolerance for sodium chlorite, chlorine dioxide, and sodium chlorate. All data given proves my contention that MMS is OK to take by mouth. Read the report for yourself. Here it is:

It didn’t hurt any of those rats used in the tests to ingest amounts even stronger than those used by people in real life.

· Reference #5 is a Health Canada report where they repeat everything said by the FDA. Neither the FDA nor Health Canada cited any evidence or tests. When I called to ask if they had followed up on the phone calls complaining about a stomach ache and low blood pressure, they said that no, they had not investigated those complaints.

Then they mislead you by stating that MMS is a 28% sodium chlorite solution and that it is a dangerous solution that can cause all kinds of terrible damage. Well, yes, didn't we learn that in freshman high school chemistry: “Any chemical in the world is poisonous in large amounts”?

The lie is that you take a 28% solution of chlorine dioxide when in fact you take a 0.00004% solution. That is 700,000 time less than what they are trying to confuse you into believing.

They want you to believe that MMS is 28% when ingested when it is actually 0.00004%. Why would they try to spread such a lie? Well, for every cancer patient they can scare into not taking MMS, the cancer industry gains $800,000.

To learn about the MMS 0.00004% strength doses, please look at the instructions for MMS on my Web Site jimhumble.is, under MMS protocols.

The Wikipedia writers talk about reduced blood pressure, nausea and diarrhea mentioned by the FDA and Health Canada. But these two agencies didn’t investigate the complaints of low blood pressure or stomach ache and they have never given any other evidence against MMS.

· Reference #14 merely cites an article written by a 15-year-old boy who does not believe in a ‘cure all’. So that reference doesn’t apply to MMS in any way.

· Reference #15 is just another announcement by the Food Standard Agency in Canada against using MMS, but they offer no evidence.

· Reference #16 again alerts us to the terrible danger, but they offer no tests or chemical theory or any other kind of data to back up their announcement. It’s just “Warning: don’t take MMS.”

· Reference #7 is even dumber. It says MMS is a 28% mixture (it is not); then it says the mixture of sodium chlorite and an acid produces chlorine dioxide (this is true); and then it cleverly says, “Which is an industrial bleach.”

Well, vinegar is an industrial acid, and salt has hundreds of industrial uses. In doing their best to make MMS sound bad, they fail to mention that MMS, like salt and vinegar, is used in mixtures thousands of times weaker than the industrial applications.My reference again is my website jimhumble.is. The instructions prove the doses are very weak.

Moving Along in their Fakery

The Wikipedia writers then make the statement that: “reliable scientific evidence” supports only dangers from use of MMS. They say that any claims of benefit come only from anecdotal reports and from Jim Humble’s book.

· They don’t mention that those anecdotal reports are in the hundreds of thousands.

· MMS is only dangerous in large quantities and so is table salt and every other chemical on Earth.

The rest of the Wikipedia article seeks to mislead you in every line. They like to throw in a few statements from some impressive-sounding authorities; e.g., that according to the EPA, neurodevelopment and reproductive damage could result from small doses of chlorine dioxide. They say “could” but offer no evidence that MMS could cause such damage. That's because there isn't any evidence of such damage ever happening.

· Reference # 6 tells of renal failure from extreme overdose, but fails to mention that there was no death, and in the last 100 years, no death has ever been recorded that shows renal failure from an overdose of chlorine dioxide.

That particular overdose was not due to MMS. It was due to someone trying to commit suicide by taking 10 grams of sodium chlorite, but the suicide was a failure.

· Reference #9 is an FDA letter sent to Jenine M. Cohoon of Provo, UT, warning her that she must stop selling MMS and other herbs. No evidence is given that is relevant to the data about MMS in Wikipedia. It is just a warning letter tossed in by the Wikipedia writers to impress you, and as long as you don’t read it, it looks like a legitimate reference.

· Reference #21 links to a study at Osha.gov. concerning chlorine dioxide and mostly rats. If you want to take the time to read it, you will see that is shows MMS is very safe to take. Keep in mind that the intensive MMS Protocol 1000 recommends 2 mg/kg per day for a 70 kg (154 lbs.) man. That’s less than was given to the rats (per their weight) and the rats were unaffected by it.

So as I have already said, these references all either prove nothing or they prove my contention that MMS is safe to take. Just remember, as with table salt, you can take too much of it. But it is plenty safe in its recommended doses.

Note: Just 2 gallons of water can kill a person. Dosage is the key.

If you want governmental proof that MMS is safe to take, go to: http://www.osha.gov/SLTC/healthguidelines/chlorinedioxide/recognition.html.

Of course the government won’t refer to it, but there it is. I suppose they will be removing it from the internet soon. It’s only used as a reference here because the Wikipedia writers didn’t realize it proves my statement that MMS is safe. They didn’t take time to read it, or they thought you would be confused.

There is a lot more to tell about this Wikipedia MMS Article, as I have covered only some of the lies. There is no room here in the newsletter but I am covering all the lies on a website, as I feel that it will give you a better idea of how MMS works and also a better idea of how the psychopaths lie. It will be on my site “MMS world court,” available for viewing in about a week. 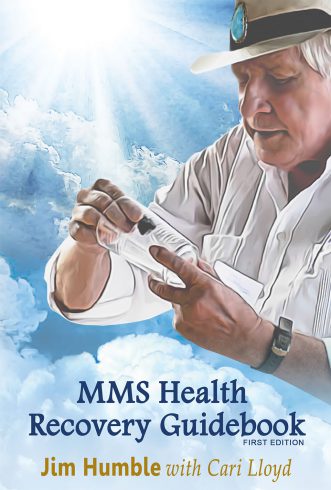